Photographs that leave a historical mark behind are something that every photographer strives for. Honor and privilege in my case are always in the first place when I get an invitation for such projects. Even after 17 years of professional career, I always somehow feel quite privileged because I know that my photos and my dedication to everything, I do have always led me to such places. The very thought of hanging out with special people and spending time with them is something that is acquired over time and constantly creates a special feeling. The Plane Swap project is one that scares you just thinking about it, so it remains especially memorable for anyone who was a part of it in any way. And the photos that remain behind us tell a special story of their own! 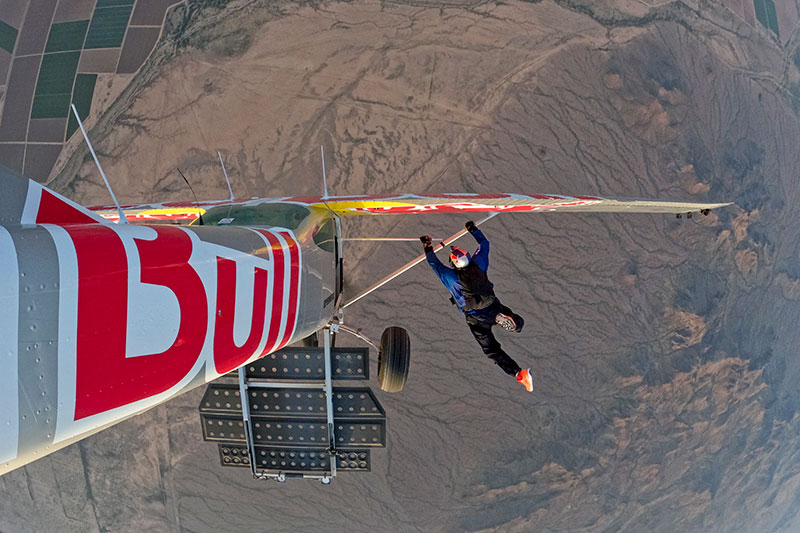 Experienced skydivers and pilots Luke Aikins and Andy Farrington attempted a feat 10-years in the making, to become the first pilots to swap planes unassisted. The feat was partially accomplished, with Aikins successfully swapping planes and landing his aircraft in the Arizona desert. Farrington, a skilled skydiver was unable to enter the plane he was approaching. He skydived into a safe landing. The second plane’s safety mechanisms activated but the plane was damaged. Neither Aikins or Farrington, nor anybody else, was injured. This was an event that had never been attempted. Never in the history of flight has a pilot taken off in one plane and landed in another. With Aikins and Farrington being two experienced skydivers and pilots, this moment required an engineering plan that took the better part of a year to plan for. Two solo-piloted planes diving toward the ground, with each pilot jumping from his plane then diving alongside and into the other plane. Both aircraft needed to fly in formation straight toward the ground and remain steady enough for the skydivers to manoeuvre through the air and into a door about the width of a household refrigerator, but not quite as tall. Also, the planes needed to ‘slow down’, because untethered the aircraft would travel at too high a speed for the jumpers to catch up. 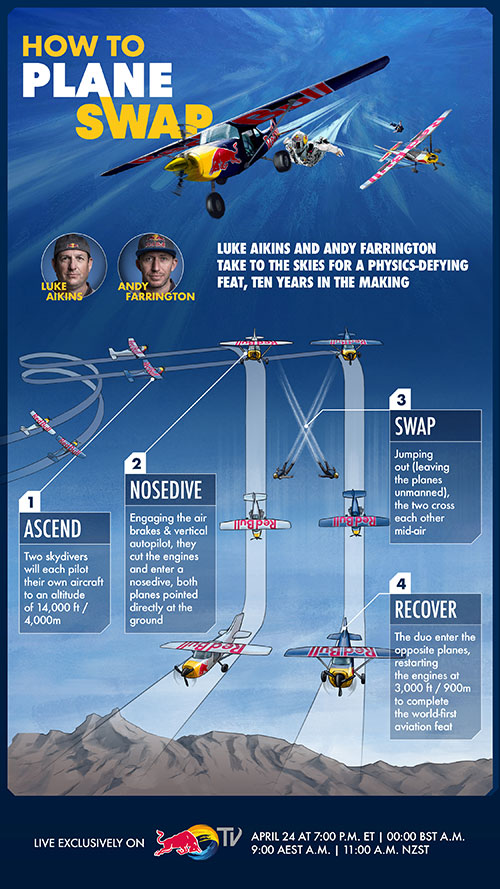 Plane Swap was Aikins’ brainchild and was inspired by a photo in an aviation publication in the 1990s. He put his name against some of the most successful aviation feats in the years that followed. He served as a consultant on the Red Bull Stratos mission, performed a historic first-ever skydive without a parachute on live TV (2016) and developed Red Bull Aces, the first-ever wingsuit slalom competition (2014). In the 12 months leading to their attempt to swap planes, Aikins and Farrington worked on a pair of experimental Cessna 182s and enlisted the help of Lead Aeronautical Engineer Paulo Iscold. Relying on thousands of hours of skydiving, piloting and engineering experience respectively, the goal was to prove the act of a pilot swapping planes was possible. Never in the history of flight has a pilot taken off in one plane and landed in another. Yet this milestone featured not just one, but two pilots who had aimed to perform simultaneously a feat that was aimed to last 40 seconds. Luke Aikins: There’s no way to test it until you do it.”

Born in 1982, Andy Farrington is the youngest member of Red Bull Air Force but, in a sense, he has the longest flying history. Andy’s mum, Jessie, made about 100 jumps while he was in utero – riding tandem, so to speak. (Maybe that explains why he’s such a natural in the sky.) An expert in multiple disciplines, Andy has won the Pro Swooping Tour, captured the Red Bull Championship in 2003, and earned first place in accuracy and second place overall at the canopy piloting World Championships. Andy is as laid back as they come – perhaps his easy nature comes from the knowledge that he’s already beaten one of the worst hands life can deal. Andy was diagnosed with cancer at the age of two and, after doctors removed a kidney, they forbade his participation in mainstream sports. “Fortunately, my skydiving family didn’t see any problem with jumping out of a plane,” says Andy with a laugh. He made his first tandem jump at the age of 12, went solo at 16 and has since accumulated many thousands of skydives, BASE jumps and hours as a pilot. Andy is in demand as an aerial videographer and photographer, but recently he’s been spending time in front of the camera as well. A star of the Human Flight 3D feature film, Andy was also chosen as one of five stunt fliers chosen for Transformers 3, featuring the first-ever BASE jump from Chicago’s Willis (formerly Sears) Tower. In addition, Andy was part of team recruited to play civilians in the high-octane ‘barrel of monkeys’ aerial action sequence in Iron Man 3. Just another day in the office for this skydiving, BASE jumping ace.

“If you’re not growing, you’re dying, right?” asks Red Bull Air Force member Luke Aikins. With more than two decades of experience in the air, Luke’s primary aim is always to keep growing his talent and to bring out the talent in others. To date, he’s logged many thousands of skydives, has excelled in competition, established various world records and is a popular performer in demos all year round. Not only that, but Luke is also respected for his skill in teaching and has a knack for innovation. Luke made his first solo skydive at the age of 16 and eventually added BASE jumping to his repertoire. A veteran contender in the Pro Swooping Tour, Luke also notched a win at Red Bull Blade Raid in 2008, a radical event that combines flying a canopy with running skis for 60-mile-per-hour descents around mountain obstacles. Since that victory, he’s devoted much of his time to the progression of research and development of equipment and flying techniques. From proposing and developing new parachute deployment mechanisms to personally participating in test jumps at 28,000ft, Luke has been a go-to consultant for researchers, as his work in the Red Bull Stratos project proves. In July 2016 he become just the third person to dive from mid-tropospheric altitude and land safely without a parachute or a wingsuit. After about two minutes of freefall from an altitude of 25,000ft (7,620 m), he successfully landed in a 100-by-100ft (30 by 30m) net just outside of Simi Valley, California, reaching a terminal velocity of 120mph (193kph) along the way. When he’s not working on projects, Luke teaches BASE-jumping and skydiving to people from all walks of life, including; NASCAR’s Brian Vickers and military personnel. He’s also a keen aerial photographer, and his work has appeared in major newspapers and magazines worldwide.